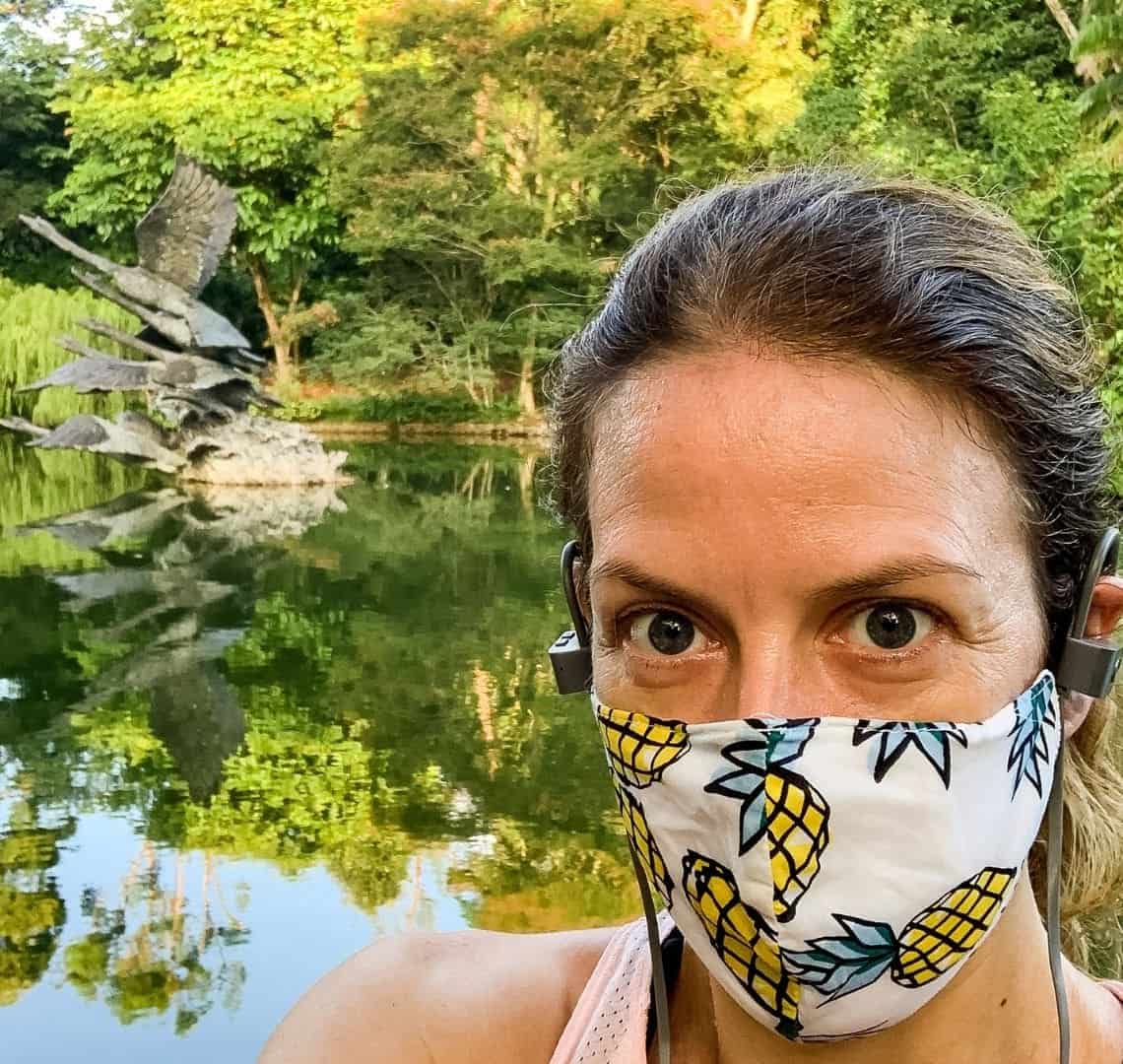 Most days I wake up grateful. I’m grateful for the kids going to school. I’m grateful for gyms that were open until last week, that hairdressers were open, and (until Sunday) to be able to sit inside a restaurant with four (it even went up to seven!) of my favourite people in Singapore.

Most days I am so used to wearing a mask that I put it on without thinking about it. Some days I even forget to take it off.

Most days I think the new normal that I get to live is pretty good.

Some days I find it hard to realise that a year ago the whole world was in lockdown.

Those were the days when virtual working and socialising was still new and online learning was still a novelty. Short-term travel plans were shelved. We read the news all the time, desperate to understand what this all meant, how the new normal was really going to be. While my kids joined PE with Joe or did Cosmic Kids Yoga, I was overwhelmed with the feeling that somehow we were all connected even though we were separated by closed borders and thousands upon thousands of miles. It comforted me that that we were all going through this together.

If I’m honest, it’s been a long time since I felt like we were all going through this together.

Some days, most days, I don’t even feel like it’s the same storm any more.

Lately, it seems like whatever the UK does we do the opposite. I’ve been feeling a bit detached from things going on elsewhere in the world. It was as if I have been watching from afar instead of experiencing it myself which, I guess, I have.

Last year, when there wasn’t even the mildest sniff of even a travel bubble here, I watched friends and family jet off all over Europe and the US on holiday while we waited patiently for news of travel options. I tried to be happy for them instead of comparing the approach here with the one there.

Now, as Singapore goes back to the strictest measures we have seen since last June, India is crashing through record highs on a daily basis while the UK and US are respectively preparing to hug each other and lose their masks.

When the third UK lockdown was announced in January, we were given more freedom in Singapore. It felt like a reward for the previous nine months of tight measures. I tried not to feel vindicated. It felt bittersweet to see people struggling just as we were getting a little freedom back. But it did feel nice to finally get some freedom after living under tight restrictions for nine months.

Turns out no mater how careful you are, there’s no moral high ground.

When the UK started unlocking last month, Singapore got more cases and tighter restrictions were imposed almost immediately including a return to groups of five, gyms closing (a mental health saviour for many), and the imposition of a mandatory three-week hotel quarantine from almost anywhere.

I’d been seriously contemplating doing the two-week option even though anyone who has done it said it wasn’t worth it.

Could we do that? Could anyone?

Just days later, in a cruel twist of coincidence, we were added to the UK green list on the very same day that Singapore announced entry permit approvals for any visa holders had been temporarily – but indefinitely – revoked.

Because, after months and months of a maximum of 2 cases a day (and usually less), we found ourselves staring down the barrel of 65 cases in just one week.

“That’s nothing,” scoffed a friend when I told them. “We get more than that in an hour here.”

I wondered when this had all become a competition.

The social measures were doable, I told myself and anyone else who would listen. We did Phase 2 for seven months (albeit with gyms open) and we did Circuit Breaker for two. The way we were reacting, it was like we’d been put back into lockdown.

We could do this for three weeks.

It has been one huge blow after another

I think on some level, we were overreacting because we knew what was coming.

Today there was more bad news.

After less than a week under those new restrictions, we’ve been told it wasn’t enough, that we need to do more. From Sunday, we will only be allowed to socialise outside of the house in groups of two and restaurants will close.

A month ago we were talking about travel bubbles… Now we should only leave the house for essential reasons. As the summer approaches, we know we likely won’t be allowed back to Singapore if we leave.

How we are ever going to get out of here, let alone get all the way home?

The difference between travel and tourism has never been greater than it feels today.

People in the UK are complaining about not being able to get to Spain and France when all I want to do is come home, or even get off this island for a few days, to move further than the 50km that is the length of this island.

Then I look at the news, I see statistics that tell me 130 countries haven’t deployed a single vaccine. I see the sheer devastation in India and I cry because it’s all so desperate. It’s unfathomable that I am so fortunate while others are suffering on a scale that my heart and brain can’t even begin to comprehend. Suddenly comparing here to the UK seems shallow and superficial.

They’re all first world problems and it’s all relative.

It feels indulgent to feel so sorry for myself.

It feels selfish and ungrateful.

I tell people every day how lucky I know we are, so how self-involved must I be to be throwing myself a pity party?

I feel guilty that we enjoy such safety when around the world the effects of the pandemic have been felt so much more forcefully.

Safety. A commodity that is worth so much more today than it was a year ago.

I feel guilty we chose to live here, or anywhere, really, that isn’t home. I feel guilty that it has been well over a year since we saw any family at all. Guilty that it has been almost two years since I saw my best friend and that I’ve never met my nephew who will turn one next month. I worry about my mum and I worry about my kids not seeing their grandparents, uncles, aunts and cousins for so long.

I feel guilty that our choices have led us here, so far away from home and guilty that we have been happy, enjoying this freedom. It’s a shock to me that the few people who have arrived here haven’t found the liberties I feel and, instead, have resented the constant but enforce mask wearing, checking-in and social distancing that affords us this freedom.

I feel guilty that some days I want to go home and other days I don’t.

Some days I feel guilty for every single thing I’m feeling.

And then the jealousy and resentment creeps in.

I look at friends and family meeting up and I feel a stab of envy that it’s not us, that we can’t do that. I look at people going on trips because they live in a country that’s bigger than a postage stamp and where domestic travel is still possible. I judge them for living so recklessly while simultaneously wishing it was me. I know that they probably felt the same when we went on staycations and cruises to nowhere while they could barely leave the house.

I look at people booking holidays now, and I wonder why they think suddenly it’s ok. I wonder how the UK can possibly offer this level of freedom when 65 cases has marooned us, once more, on this island. I wonder how long we can all keep trying to find the balance between case numbers and other things like mental health, missed diagnoses, seeing loved ones, the economy and so much more.

I look at all of it and wonder how I would act and feel if I had lived this whole experience in a different country. Would I still believe that just because you can, doesn’t mean you should? When it’s finally our turn, will I get on the first plane out of here to see my mum just because I can?

I don’t know the answer to any of this rambling except that, more often than not, if I’m feeling like this than many of you out there are feeling the same way. Maybe the answer is that there is no answer. Maybe the answer is that we keep taking each day as it comes, putting one foot in front of the other and being grateful for the things we have because the alternative is to fall into some abyss of self-pity or bitterness.

Maybe the answer is to treat each other and ourselves with some more compassion. To know that it’s okay to rejoice in the freedoms that others have while still feeling jealous. To know how to live with our decisions and actions and that guilt serves no-one. To know that envy is a valid feeling that doesn’t have to eat us up inside.

Maybe the answer is to know that we’re not going through it together anymore but we are still all in it together.