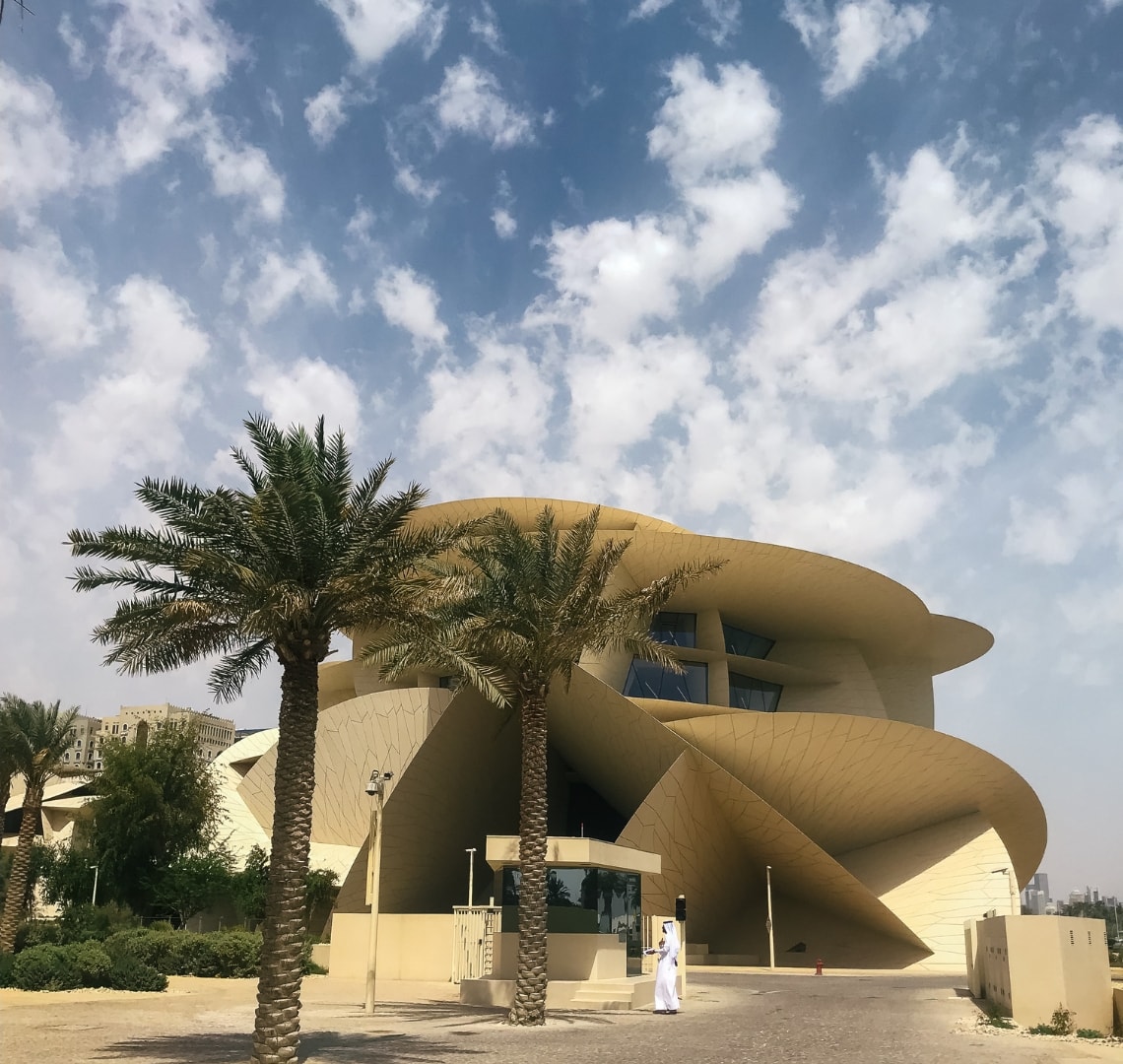 A project in the pipeline since 2011, the National Museum of Qatar opened it’s doors to the public on 28 March 2018. It’s building that we have been watching evolve since our arrival 4 years ago. As we have driven past time after time, we have watched as the petals of the desert rose that inspired the museum’s Pritzker Prize-winning architect Jean Nouvel have unfurled.

With an original opening date in 2016, opened almost 3 years later. Only partially visible from the street, the National Museum of Qatar gives no hint to its immense size until we walked up to it. Even then, it’s only when you get to the entrance hall that you understand the sheer grandeur of the building.

Suddenly it’s easy to see how it took so long to build. We joked that for every accolade that Nouvel has received for this masterpiece, there must be a thousand curses from the workers who had to build it – so intricate is the design and so enormous the scale.

The build up had been better than almost anything I’ve seen in Qatar. Usually I find myself becoming aware of new openings just a few days before (or, worse still, a few days after). With this one we all knew for weeks and months that it was imminent. I’ve seen images on Instagram and Facebook for weeks and months. Banners lining the Corniche proclaimed the imminent opening. Friends who work for the Qatar National Museum Authority were rushing about working as many hours in the day as they could.

I was excited to visit this new museum. I like a good art exhibition so places like the Museum of Islamic Art and the Sheikh Faisal Museum are great for me in small doses. But history is much more my bag and the National Museum of Qatar was always going to be mush more up my alley.

The hype was impressive – could the National Museum live up to it?

When we arrived 4 years ago, I didn’t even know what a desert rose was. Learning that this building was inspired by the crystal clusters formed in arid desert conditions made me look it up. These crystal clusters of gypsum or baryte form during the seasonal changes in the water table.

Over the years we watched as the building’s shape has emerged, encircling the original 20th century palace of Sheikh Abdullah Bin Jassim Al Thani. But nothing prepared me for the sheer scale of the building as we approached the entrance.

The building itself is a work of art. As you approach you can’t help but be impressed.

As you’d expect on opening day, there was no shortage of staff around to help visitors.

Golf buggies were available to drive to and from the carpark if necessary. It isn’t a long way but would definitely needed in the summer heat. I’m also sure that people with mobility requirements, small kids or just people tired after a long tour around the museum would welcome a ride.

A friendly security guard escorted us from near the building, through the entrance and to the ticketing desk. I wouldn’t have known where to go without him! At the ticketing desk itself I was pleasantly surprised to find that all residents of Qatar get free entry. Even more impressive is that tourists can re-enter the museum for three days using their original ticket!

There are three main sections to the National Museum of Qatar encompassing 11 galleries in total:

The geographical and geological creation of Qatar

The first part of Qatar National Museum takes you back in history to the formation of the Persian Gulf as we know it today. Incredible audio-visual displays demonstrate the movement of the earth’s tectonic plates.

There are specimens of fossils and skeletons from millions of years ago while in the background huge screens display images of wildlife.

A summary of Qatar’s history

Moving from the natural world, the exhibition continues on to give an overview of how human life on the peninsula evolved. The descriptions of Qatar so long ago are so interesting even if you can hardly believe them. It’s hard to imagine now that it is so arid! The digital media continued to impress in this section. My favourite part was a moving map depicting the annual migrations between the towns on the coast and inland camps.

There’s lots of information in this section about global trade, tribal and international disputes and the impact that they all had on the country. There are displays on Bedouin culture – including one about camels, another about Bedouin tents (literally called Tents of Hair in Arabic because they’re made of, you guessed it, hair) and another one on traditional dress.

It’s also in this section that you learn all about the pearling industry – a prominent industry in Qatar until the 1930s. Not knowing much about pearling, I was fascinated to read more about it. Then I reached the Pearl Carpet of Baroda…

It is Mind Blowing! 1.5 million hand embroidered Gulf pearls adorn this enormous rug. I’ll be going back just to see this one item!

The third section of the National Museum of Qatar covers more modern day history. I found this section particularly interesting. This, for me, was where Qatar came alive. With modern day history it becomes so much more relevant and relatable.

There were displays about the discovery of oil and a brilliant digital map detailing how Doha expanded over a 50-year period. This section also has a display on each of the Emir’s. They include a description of each reign and a summary of notable historic events both locally and globally.

Information courtesy of the National Museum of Qatar’s website and Wikipedia!

The digital media and children’s areas were huge highlights for me.

The sweeping, curved screens in each section with films about the topic playing in the background. As I mentioned before, I was also a big fan of the global migration and 50 year Doha time lapse digital maps. The films on the Bedouin tents, a baby camel and the tribals wars on horseback were incredibly powerful. The interviews with people in the modern history section are also incredibly interesting. It’s very dramatic and you’re literally immersed in the exhibition as you walk around.

I loved that each area had an interactive kids area to make the museum more interesting and fun for Things. From learning to row a dhow to being in an “underwater” pod learning about pearl divers, I’m really glad that the design incorporated something for all ages.

The display styles were super cool too. There are many exhibits that are visible from all angles as they’re suspended in cabinets made entirely of glass. The sheer size of the museum means that there is plenty of space to walk all around each display.

The winner for me, though, was the Pearl Carpet of Baroda. Check out these pearls and tell me that’s not impressive!

To be honest there weren’t many.

We were literally some of the first people through the doors and there weren’t too many crowds. I’ve since heard that there were loads of queues over the weekend. If you’re a resident in Qatar now who can wait to go or reading this at a later date I’d say this won’t be the case for too long.

The museum readily admits that there isn’t a great deal of information on certain periods in Qatar’s history and this was noticeable as you walked through the exhibition. I don’t know how you could have overcome this though!

I’ll point out here that I went without Things in tow. I liked that there were interactive options for kids. However, I have heard that people who have taken their younger Things have struggled to keep them entertained. Their Things weren’t allowed to touch anything and the stewards ushered them on at regular intervals.

The National Museum of Qatar can be found just off Doha’s Corniche – a wide sweeping crescent that hugs the shoreline.

Clear signposts direct you where to go if you’re driving and taxis should be able to find it pretty easily. Parking can get busy at peak times.

The tour busses have already added it to their routes.

At the time of writing, tickets to the National Museum of Qatar are 50QAR for tourists. Entry is free for all residents of Qatar. The museum is open 9am-7pm Saturday-Thursday and 1.30pm-7pm on Fridays.

There is currently one cafe open with soft drinks and sandwiches available. The website advises that two more food outlets will open soon.

There are two gift shops – one for Things and one for adults. They’re on the pricey side but avoid a lot of the unnecessary and irrelevant plastic tat that you often get in gift shops. I love the fact that they also showcase some local artists here.

For more up to date information, check out the National Museum of Qatar and Qatar Museums Authority websites.

Are you new in town or visiting?

Check out my best posts on Qatar!